If you’re already a fan of Matthew Bourne and his company New Adventures, you are likely to have bought a ticket expecting to love what you see in all his trademark lavish and flamboyant style. But with The Red Shoes, I wasn’t sure what to expect.

Unlike some of his other works such as Edward Scizzorhands and The Nutcracker, I didn’t know the story of The Red Shoes so I went into the theatre not knowing what I would be faced with but with a lurking confidence that the story would be told in Matthew Bourne’s characteristically bold style.

The show premiered at the Theatre Royal Plymouth before heading up to take up a Christmas residency at Sadler’s Wells until the 29th January which is where I caught a performance of the show last Tuesday. 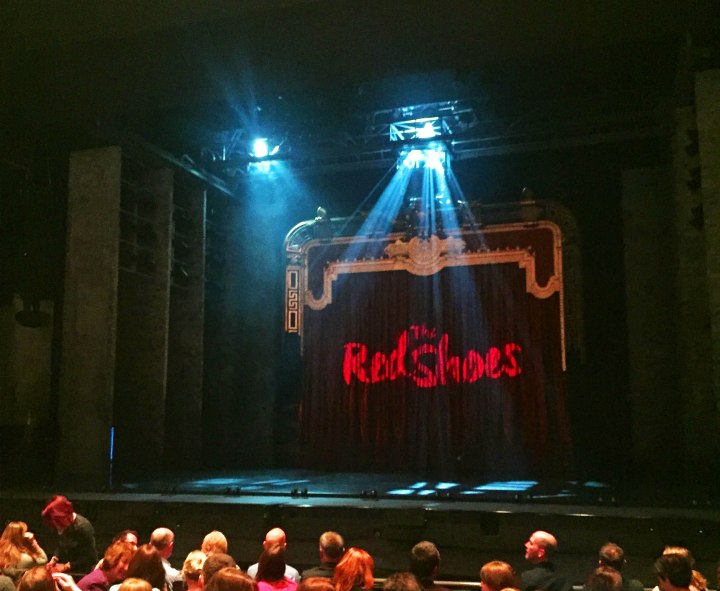 The story began with us as the audience watching a traditional ballet show, pretty ordinarily. But I had a hunch that this wasn’t all it seemed and before long the proscenium archway on stage and the performers within it swung around so that the perspective was completely altered and we were mirroring an audience also watching the show on stage.

It was an illusion of dance and clever scenery before our very eyes, and there was a lot more of this to come over the next 90 minutes.

It was a perfect introduction to New Adventures perfect choreography, seamless set trickery and the story – a tale of a rising star who gets her big break after landing the lead role in a ballet production of the classic fairytale ‘The Red Shoes’.

The whole ensemble was full of unique characters (credit to the amazing performances from the company) which made the tale come to life in all of its incarnations – from the audition scene with all of the performers at the barre and the hilarious but formidible dance master (played by Glenn Graham), to scenes in Monaco and an East London Music Hall.

But the most incredible part of the whole thing in my opinion was the show within a show.

We were treated to the fictional ‘Ballet Lermanov’ performance of The Red Shoes. Sets changed, costumes changed and the whole performance brought to life the Hans Christian Anderson tale before we were taken out of our trance and reminded that what we were witnessing was all part of the plot thanks to the round of applause that played out of the speakers before the curtain fell on the first act.

Check out my review of Candoco Dance Company.

The first half was an hour in length, the second only half an hour, which I felt was slightly disproportionate as it made the story feel like it wrapped up far too quickly.

But then that may be because I was so immersed in the story that I could have watched it continue for much longer!

I won’t say too much about the second half but what I will say is that again there is some magnificent staging and set design (by Lez Brotherson, also responsible for costumes) a wonderful marrying of dance and drama by the performers with an ending that crescendoed dramatically had the whole crowd on their feet.

Those who know the story of the Red Shoes already might think they know what to expect from this show, but as always with Matthew Bourne you can never quite be sure but the result is always surprising in the best way possible.

When The Red Shoes finishes at Sadler’s Wells it is heading back on tour again – find out more here.