After pretty much spending the first two days of our holiday plodding around the city, we thought we’d take the opportunity to chill out at the pool for a day as holidays should definitely be relaxing too. Also, the weather was forecast to be amazing and I didn’t fancy walking up the 498 steps of the famous tower in Bologna in the boiling heat!

We had breakfast and then headed over the road to our hotel’s sister hotel, the Savoia Hotel Regency, which had a lovely pool and patio area and also wasn’t busy at all. No getting up super early and reserving your sun beds like what some do in hotels on holiday (which is always really annoying), there was a maximum of about 8 people around the pool at any one time which made it really chilled.

After a day of chilling, swimming and burning (I’m a forgetful sun creamer) we headed back to the room and had a nap before heading out to eat. I feel like the sun totally Zappa my energy, and even though we hadn’t been doing anything all day I was still really shattered. We decided to go to the hotel restaurant as it had amazing reviews and seemed to be full of a mixture of locals and tourists, which is always a sign of good food if the locals enjoy it!

We sat at our table and got a complimentary glass of Prosecco and some aperitifs. One major thing I notice in Bologna and Italy as a whole possibly, is that Prosecco is everywhere and so cheap! I think I paid 3 Euros for a glass in one restaurant, which is probably around £2.50, now I wish that were London prices rather than £5 a glass!

For our starter we decided to opt for a platter of Bologna cured meat again as it was literally my favourite food of the whole trip! And then for the main course we were both a bit more adventurous. Jake, my boyfriend, had a traditional Bolognese veal cutlet (which looked a bit like a chicken escalope covered in cheese, but that shows you how much I know about food – oops!). And I had some seafood pasta which was AMAZING. I love seafood, and especially love shellfish so I was in heaven. Shellfish can be quite intimidating, especially when you have to unshell the food yourself, but luckily it doesn’t phase me too much. 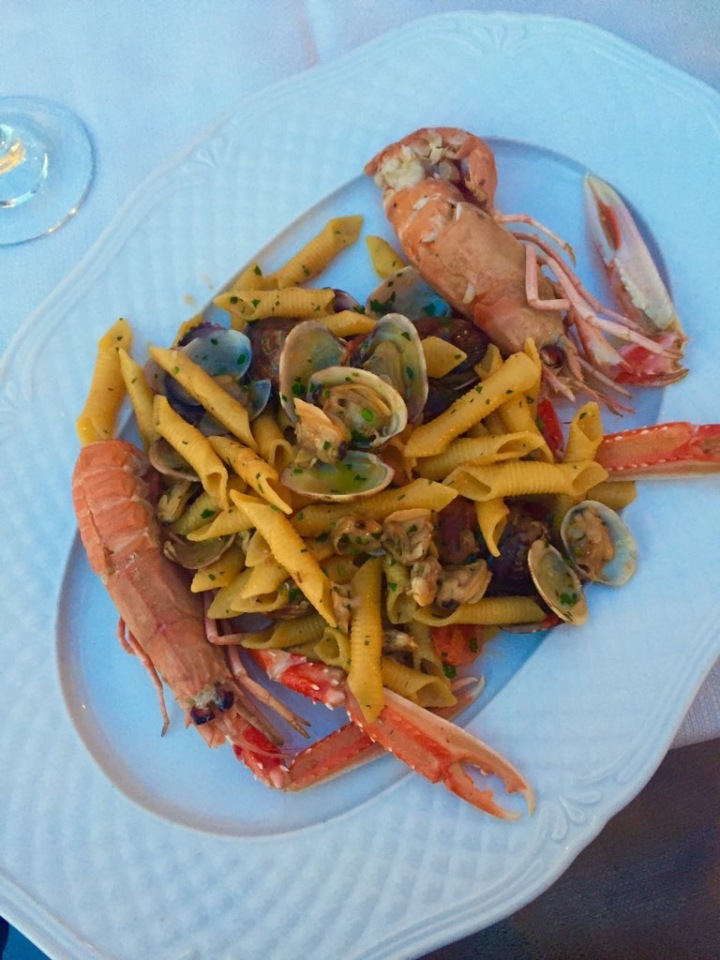 It ended up looking like I’d eaten a whole rock pool with the shells left on my side plate! The plan after our main course was to get a dessert but after two courses we were both stuffed and decided to call it a night as we had a big last day planned in Bologna city before we caught our plane home to London.

We had to check out of the hotel at 11 so we had a nice chilled breakfast and packed up our things before checking out. Our flight wasn’t until 7pm so the hotel kindly let us leave our stuff at reception while we spent the day in the city. We hopped on the number 20 bus into the town and grabbed a coffe to prepare for our climb up the 498 steps of the Asinelli Tower. We thought it would be the perfect thing to do on our last day and take in Bologna from above and try and spot all the places we’d been to, but admittedly I was a little nervous as standing below it you realise how high it actually is!

It was 3 Euros each to climb so we bought our tickets and began our ascent, it was fine to start off with but after a while I started to get a bit nervous! The stairs were all wooden, and when I thought about how old they were it made me feel a bit queasy but I soldiered on because I knew the view would be worth it. Luckily after every 10 flights or so there was a wooden platform, so you didn’t have to look down and see all the way to the bottom which I think would have been pretty terrifying. Eventually we got to the top and the view was amazing! It was almost 360 degrees and we could see the whole city all the way up to the sanctuary on top of the hill and even out towards the airport. 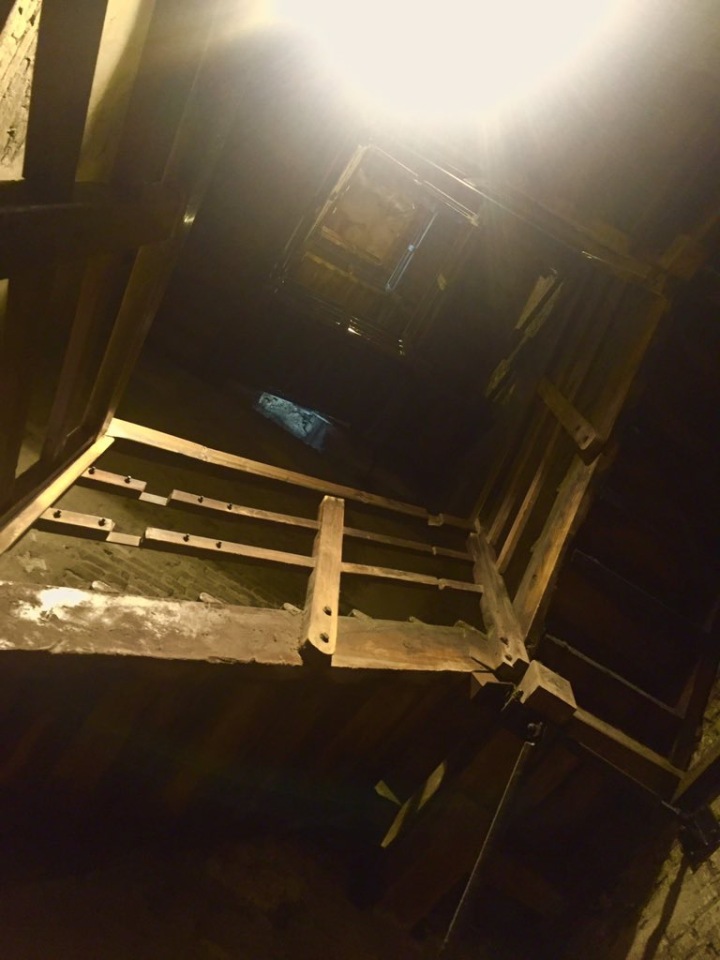 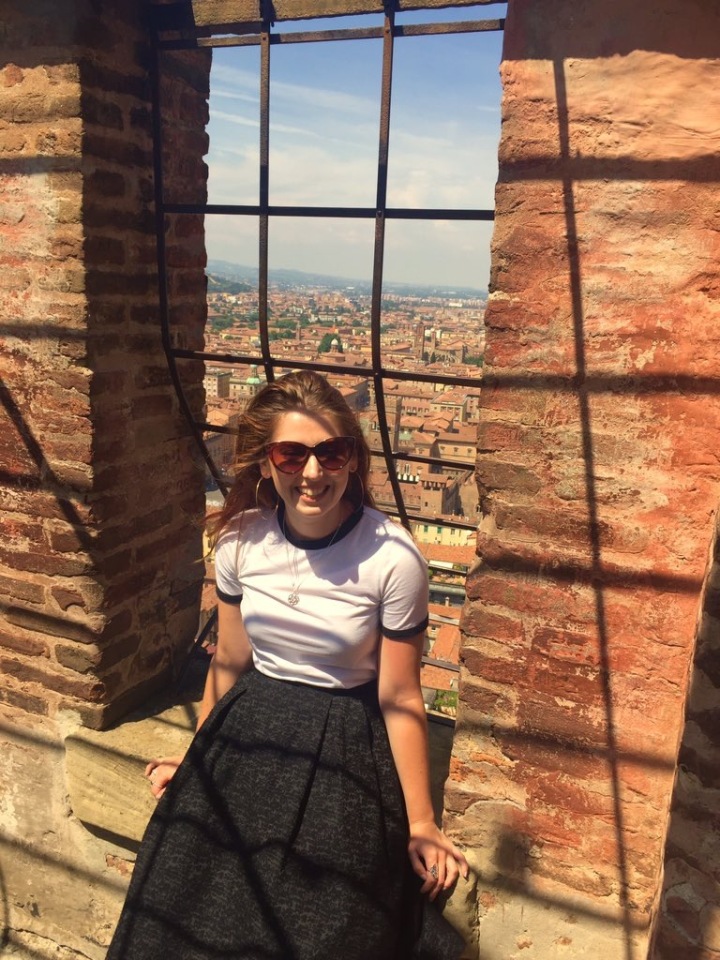 After twenty minutes or so taking in the view, we thought we’d start the climb back down which was worse! The stairs felt much smaller and steeper on the way down so I was clinging for dear life the whole way!

When we got to the bottom we had our final (sob) gelato and then went to refuel with our final taste of Bolognese food before our long journey home. As we strolled around to find a place to eat we stumbled across the whispering walls which are four corners of a courtyard that if you stand in the crevice and speak, people can hear you in the other 3 corners despite being really far away. It’s hard to explain unless you experience it but it was pretty cool and you can see the marks on the walls where people have stood and tried it out. We had found a spot of lunch in the market and then headed onto the bus for the last time to grab our case from the hotel and catch a taxi to the airport.

Bologna was an amazing city full of cool things to explore and full of history, I’d definitely recommend it to anyone who loves exploring new places and eating good food! Although I will admit it’s quite small and I was glad we had a pool to have a chilled out day in. There’s certainly not as much to do in Bologna as in some other Italian cities like Rome or Milan, however that was part of Bologna’s charm, the fact that we could explore it for our own and discover it without having to follow a guide book.