I know my posting has been a little sporadic lately and I missed out last Wednesday and Sunday but it’s because I had a super busy weekend and then went away to Italy for a few days! In the same way I wrote about Rome when I visited back in July, I thought I’d do a few posts documenting my time away.

We had a super early flight booked to Bologna. My boyfriend and I had never been before and for once, I hadn’t researched our holiday destination like I was writing an essay! An early flight gave us an extra day of exploring and even though we were groggy at the time, it was well worth having the extra full day of our trip. 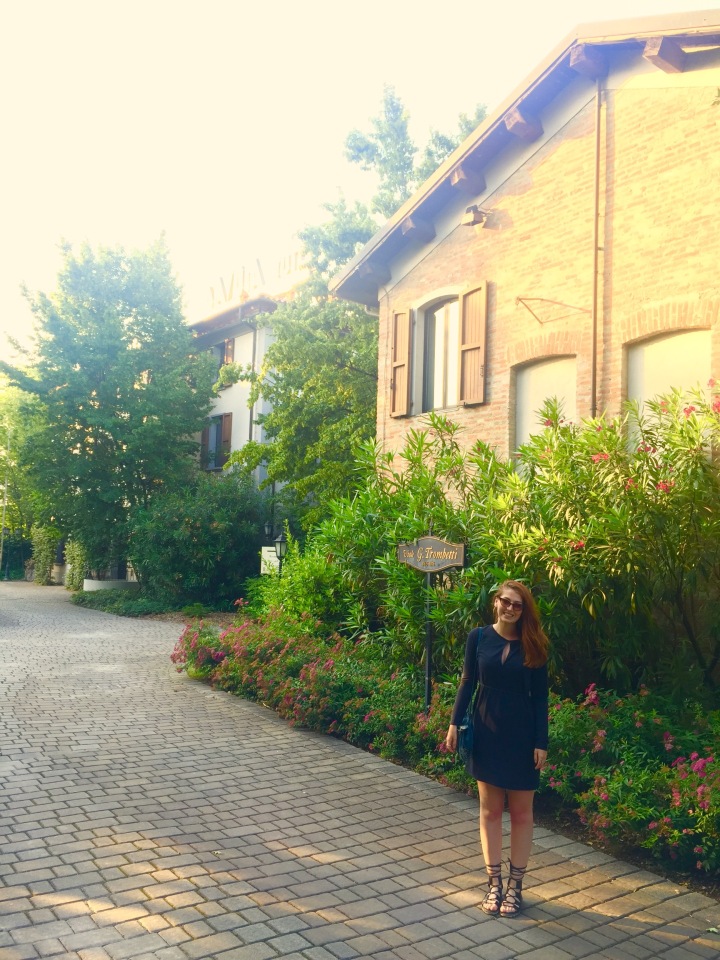 We arrived in Bologna at our hotel, the Savoia Country House, at about 11am. We weren’t meant to be allowed to check in until 2pm but thankfully our room was ready and they kindly let us check in early so we could start our trip. The hotel we were in was a gorgeous country house surrounded by pretty flowers and trees and the inside was covered with Jack Vettriano paintings, it felt very Italian! Across the road from our hotel was its grander sister hotel, the Savoia Hotel Regency which had a beautiful pool that we had full use of, a lovely bar and restaurant. We started off at the pool to rest from our early morning, and then in the early afternoon headed to the city to explore Bologna!

We still hadn’t eaten since breakfast at Gatwick so our first port of call in the city was food! We had a mozerella and Mortadella Ham Piadina (which is kind of like a tortilla) and then off we went. It took a bit of wandering around the narrow red brick streets but we soon emerged into the main square (Piazza Maggiore) and found the imposing Bologna Cathedral.

From the front it looks really unusual, grand from the bottom to halfway up and then normal brick the rest of the way. This is apparently because the city wanted to build a cathedral grander than that of Rome, and when the Pope caught wind of it he put a stop to it half way through building! The result of the contrast between the top and bottom halves of the building is pretty unique. 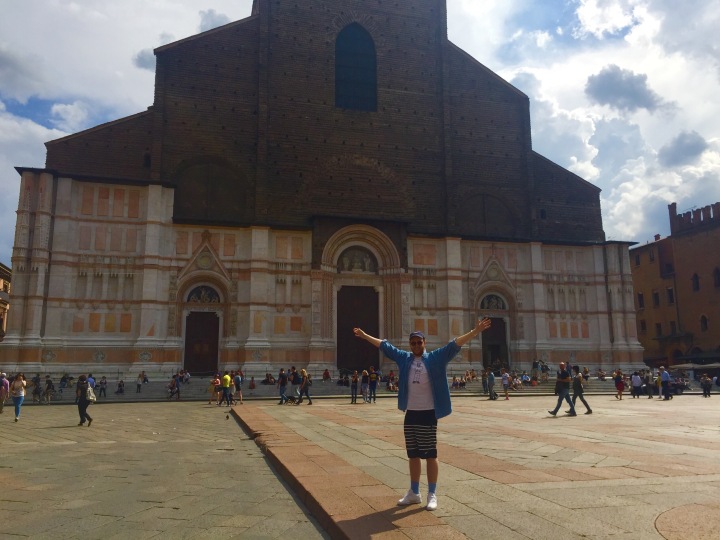 As we wandered further around and out onto one of the main streets we soon saw the city’s most famous landmark, the two famous towers that loom over Bologna. They are two of the last remaining medieval towers that once made up Bologna. In medieval times each family built the towers as display of wealth, the taller the tower the richer the family, and once Bologna was full of them kind of like old fashioned skyscrapers. 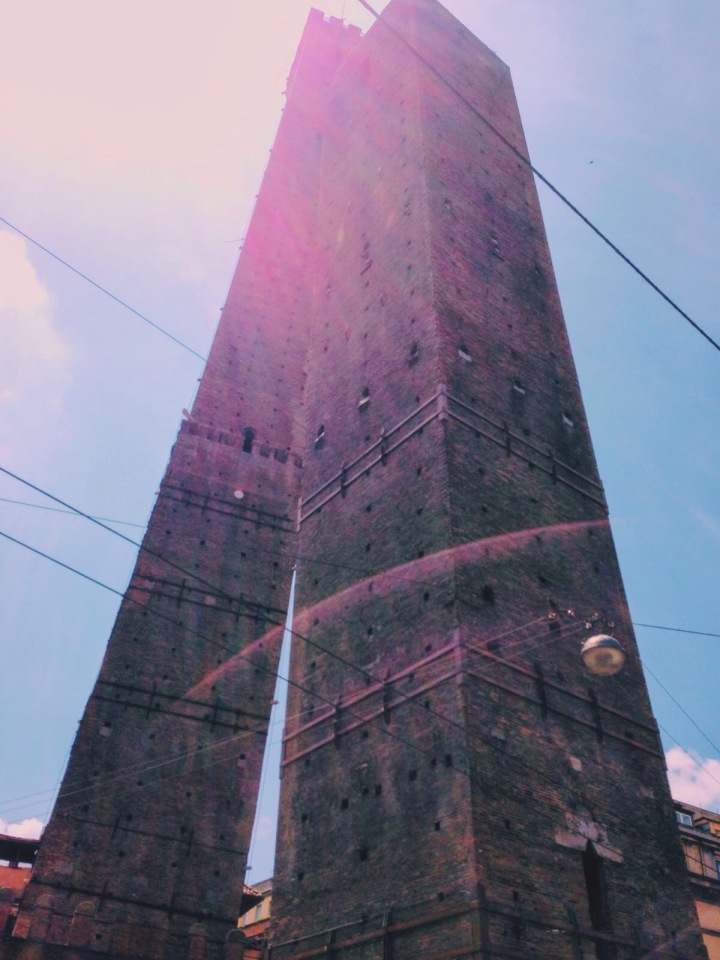 You can climb up them and take in the panoramic view of the city, but we decided to wait and save that until our final day. As it got later we decided to find some dinner. Bologna is famous for its food and is known across Italy as the ‘fat city’ for the amazing ingredients that the region produces, notably is cured meat, tortellini and Parmesan cheese. We chose a cured meat platter for our first evening to sample the different types of ham in Bologna and it was amazing, we soon filled up on the bread, meat and the best olives I’ve ever tasted.

The next day we began by chilling for a bit as we were tired from the night before. It was cloudy when we woke up, but I was praying the sun would break through so we headed to the pool. After about 45 minutes of hoping the clouds would clear we decided to call it a day and head into the town – probably also a good idea as a wedding had taken over our hotel and it was the most extravagant thing I’d ever seen, the bride even arrived by helicopter! 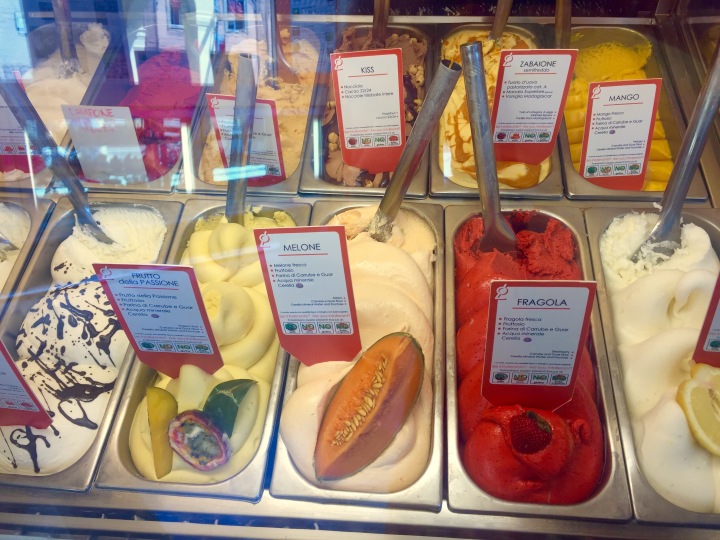 Despite the cloudy sky, it was incredibly humid so we cooled down by grabbing some gelato. The way they display it in the gelateria’s is so pretty you don’t want to eat it and spoil it! But it was the best ice cream I’ve ever had and I went for a white chocolate and cherry flavour while my boyfriend opted for pistachio and coconut. 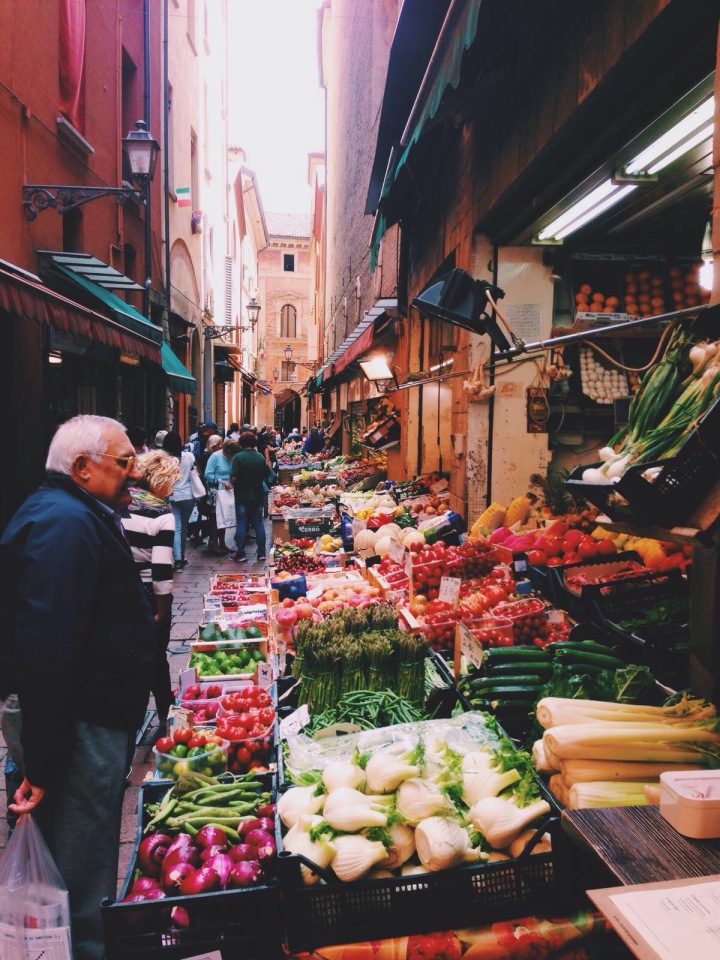 We walked around eating our gelato until we stumbled across a market which looked like the perfect place for lunch. We always seem to find amazing markets when we visit different cities (my favourite is La Boqueria in Barcelona) so we thought it would be a good place to eat before we went on our trip for the day.

The plan for the day was to take a trip up a hill just outside the city to visit the Sanctuary di Madonna di San Luca, which is a large church that overlooks the city and is isolated on top of a tall hilltop. To reach the sanctuary, there is a footpath 5km long under a colonnade of archways that takes you all the way from Bologna, up the hill and to the top. As it was such a warm day we opted for the easy option, the San Luca express, a small train that took tourists up and down the hill four times a day. 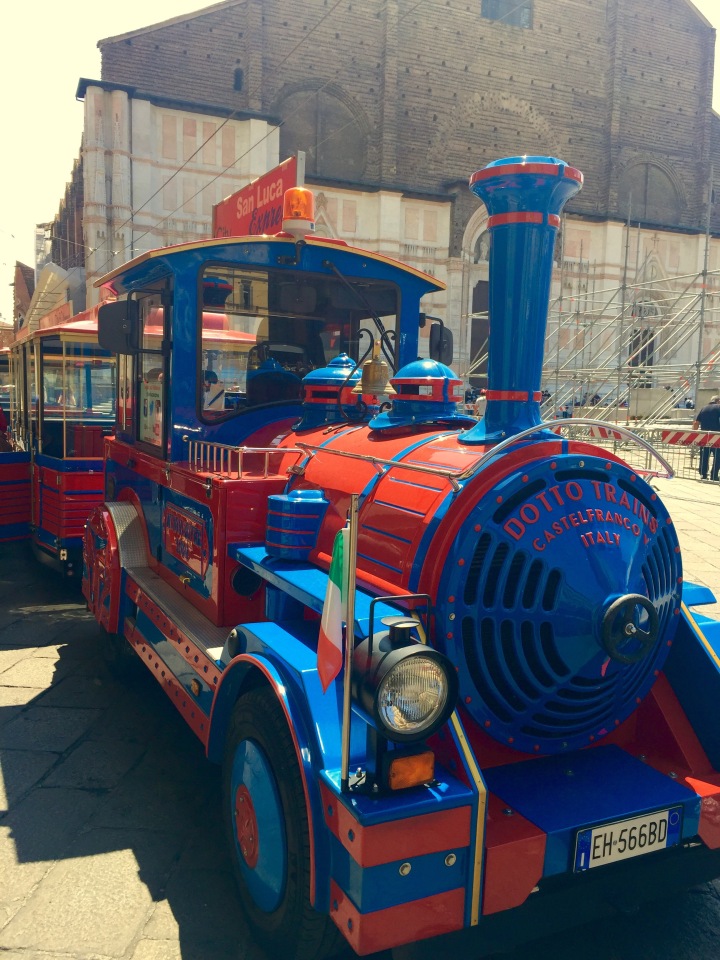 It took around 30 minutes to get to the top and once we were up there, were able to soak in the most amazing views of the sanctuary and the Bologna hills. 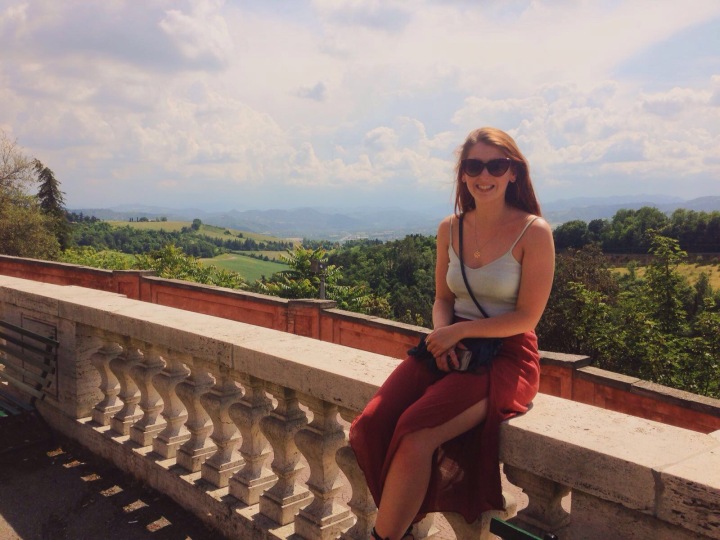 When we returned to the city, we wandered some more and visited some interconnecting medieval churches in the city centre. You could spend a whole day in Italy just looking around churches as they are everywhere and are all stunning inside. A big tip I would say to any ladies is to keep a shawl or scarf in your bag with you so you can cover your shoulders if you need to. Some churches are more relaxed than others, but it is better to be prepared and to be respectful when you do visit.

After a long day of visiting sights, we decided that for dinner we should try and find some real Bolognese in Bologna! They actually call it Ragu not Bolognese, and it is served in with tagliatelle rather than spaghetti. We ate at a place called Eatily and enjoyed some prosecco with our meal. My favourite thing about going for dinner on holiday is eating outside, it’s very rare you get to do that in London sadly. 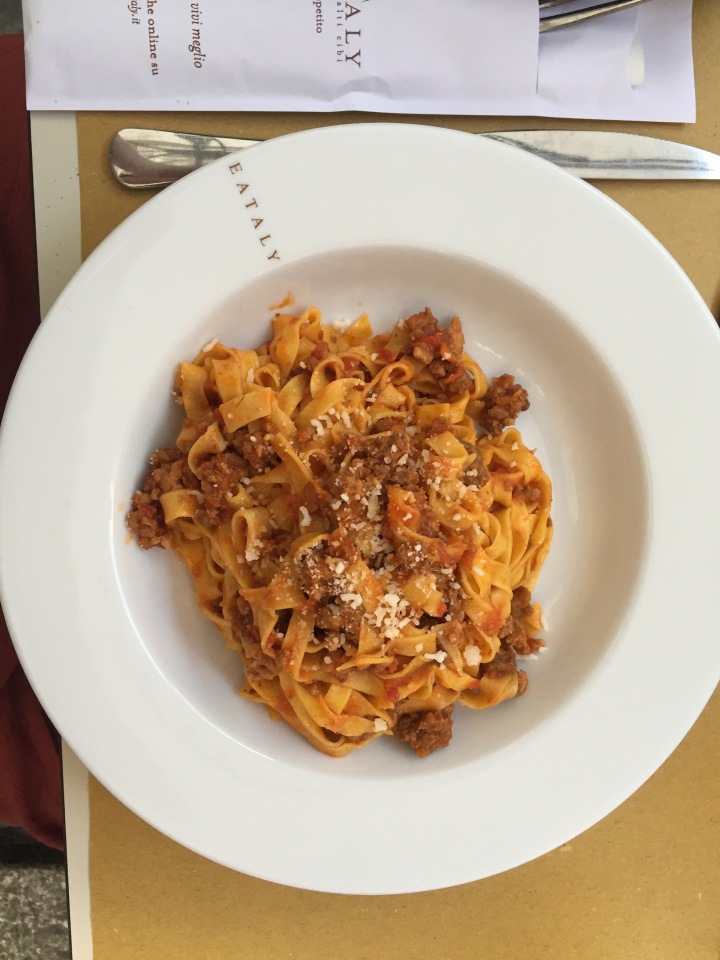 Part Two to come tomorrow! If I’d tried to fit it all in one post it would have given my dissertation a run for its money in the word count department…….