When you visit another country and a local find out your British, you can bet your life that they will probably ask you a question about one of two famous Harry’s.

Do you know Prince Harry?

Have you been to Hogwarts?

The answer is no to either but I’m still holding out for the first (Harry if you’re reading I think we’d get along famously).

Hogwarts isn’t real much to the sadness of many of us Potter-heads, but there’s lots of places you CAN visit in the UK to feed your magic habit nicely.

London’s always had King’s Cross, and in fact the wall between platform 9 and 10 has always existed – it’s just people started running into it after they’d read the Harry Potter books.

But now London ALSO has the House of Minalima.

Nope its not a house at Hogwarts, it’s actually a four story shop come showroom in Soho which is home to the work of graphic design duo Eduardo Lima and Miraphora Mina – hence Minalima.

They were responsible for all of the graphic design for all eight Harry Potter films and thats A LOT of art.

It’s no wonder that the top two levels of their shop on Greek Street is completely taken over by their work from the films.

You know you’re entering the wizarding section of the shop as you begin to descend a staircase littered with Hogwards acceptance letters addressed to Mr Harry Potter and walk past a large faux stained glass Hogwarts window.

The first Potter floor has a cabinet full of original props from the film and many books from the Hogwarts Library including the cover of Gilderoy Lockhart’s (played by Kenneth Branagh) book ‘Magical Me’ and the designs for many of Weasley’s Wizard Wheezes sweets.

I’m a die hard Potter series fan, and for me the most impressive item in the collection is the original design of Sirius Black’s family tree which is featured in the films on a tapestry in the house at 12 Grimmauld Place and is so incredibly intricate up close. 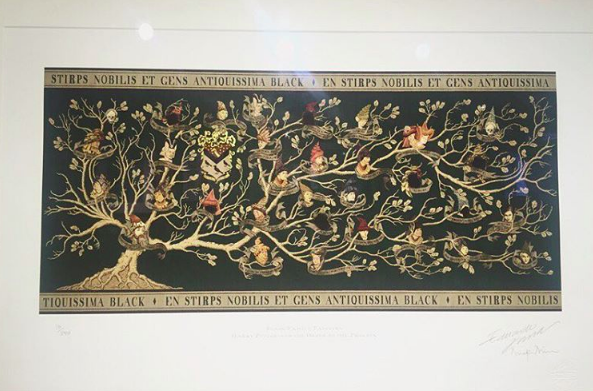 I don’t want to put too many images in this post because it all really needs to be seen for yourself!

The second floor is home to Daily Prophet front covers which tell the story of all the MAJOR wizarding drama that features in the series including Sirius Black’s infamous escape from Azkaban.

The whole place is full of amazing art work and reveals the attention to detail that is what makes the Harry Potter series so magical.

Definitely a must see for ALL muggles.