When people asked me where my next trip away was and I told them ‘Bilbao’ the response was mostly “Amazing! Where’s that?”.

It did surprise me a little, as a major city in the north of Spain I thought it might have been a little more recognised than the reception I got from people, but thinking about it, all I’d really known about the city in the Basque Country before booking was there was a Guggenheim Museum there.

My boyfriend booked the flights as a Christmas present for me and as nobody loves a gallery more than it was a guaranteed winning move to visit there mostly due to it’s fame as the home of the Frank Gehry designed building full of contemporary art.

But beyond the Guggenheim, Bilbao has so much going for it and part of that is because lots of people probably haven’t considered going.

There’s definitely a tourism epicentre of Bilbao, mostly focused around the Guggenheim, but sprawling beyond that it was nice to feel like you were walking around discovering the place for yourself.

We toured the museum first which took a good few hours before then taking a wander along the river. Half of the beauty of the Guggenheim is enjoying it’s steely silhouette from the outside so after we were done exploring the art inside we took in the building from over the river to get a different perspective (and those shots for da gram, obvs).

Once we had ticked that off the list we were left to our own devices and wandered around the city strolling in and out of Pintxos bars and sitting in the sunshine.

A hugely noticeable positive about Bilbao was how incredibly clean it is. No rubbish covered the streets and there was barely any graffiti compared to many rival European cities. Just sitting on the street with a drink was enough, but be warned, when it rains in the Basque Country it pours so take a brolly at all times.

But as quickly as the weather darkens, it lifts again and after dedicating some time to Pintxos the weather outside will likely have gone back to sunshine again.

Like with many traditional European cities there is an old town and a new town. The new town is full of the usual shops that you would expect from a Spanish city; Mango, Sephora and El Corte Ingles and the old town is like being in Gothic Quarter Barcelona.

Tiny winding streets lined with Pintxos bars and littered with cathedrals and fountains make the old town a great place to get lost in at night and feel like you’re amongst it with the locals; again, I can’t stress enough how un ‘touristy’ it is which makes for a great eating experience,

We only had one night’s stay in Bilbao (which I would say is enough) before we would move on to the seaside town of San Sebastian but had two full days to explore before then.

On day two, we sat out by the river and ate breakfast before we decided to head up and take in a viewpoint of the city from the hills surrounding it by funicular railway up the side of the cliff.

For those looking for a photo opp, this is it, and for those looking to take in the city from a different perspective this is perfect too. The view stretches all the way out to sea, beyond the airport, and dwarfs the imposing Guggenheim into glittering fish scales on the bank of the river that cuts through the city. 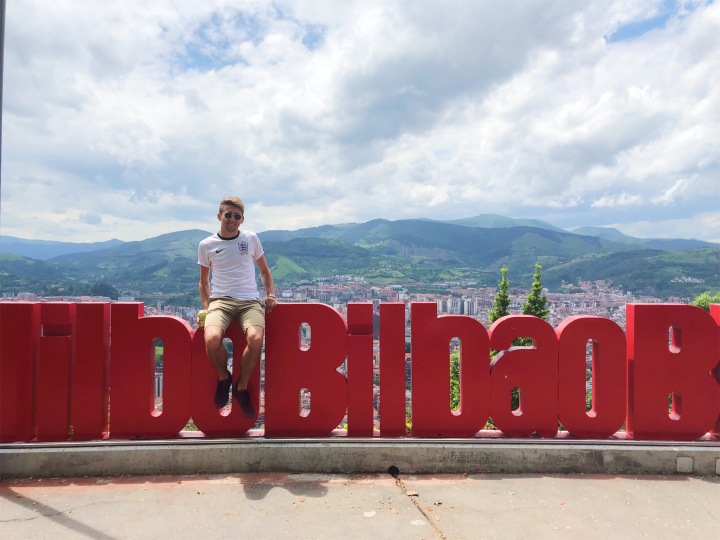 A worthwhile excursion and a nice way to say goodbye to a wonderful 24 hours exploring Bilbao.